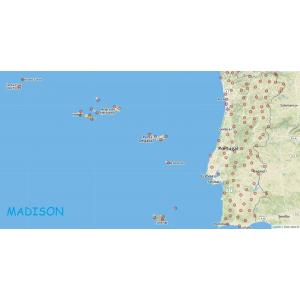 The Dialectal Sound Map (MADISON, «Mapa Dialetal Sonoro») is a sample of the Portuguese dialectal landscape from the last quarter of the 20th century. It consists of a collection of extracts drawn from the dialectal interviews that were recorded for several linguistic atlases undertaken by the Dialectology Group from the Center of Linguistics of the University of Lisbon (CLUL).

These atlases, some of which are still under development, are the following:

- Atlas Linguístico-Etnográfico de Portugal e da Galiza (ALEPG) [Linguistic-Ethnographic Atlas of Portugal and Galicia] – it was launched in 1970 and the data collection in the national territory took place between 1973 and 1997. Among the different linguistic atlases that cover the continental and insular Portuguese area, ALEPG features the densest network of survey (200 locations) and the largest questionnaires (ca. 3500 questions in 70 interviews; a reduced version of ca. 2000 questions in 130 locations).

- Atlas Linguarum Europae (ALE) – the data collection for this atlas was carried out in 1975, throughout a network of 53 locations over the continental territory; the interviews were conducted with a questionnaire of ca. 550 questions.

- Atlas Linguistique Roman (ALiR) – the data collection for this atlas started in 1987, in a network of 110 locations in the Portuguese continental and insular territory, and using a questionnaire of ca. 600 questions.

- Atlas Linguístico do Litoral Português (ALLP) [Linguistic Atlas of the Portuguese Coast] – a first phase of data collection for this atlas took place in 1984/85, in 23 coastal locations in the continental territory. Later on, interviews with the same questionnaire were conducted in 17 locations in the archipelagos of Madeira and Azores. The full questionnaire comprises ca. 1200 questions, from which only 250 questions on fauna and marine flora were systematically asked in all the territory.

All the locations interviewed for the different atlases are small rural or fishing areas with little population.

The informants, men or women, are born and permanent residents in the location of the interview, who were considered representative of the local speaking ways. They are preferably no younger than 50 years old and illiterate or with a much reduced level of education, to avoid the interference of writing conventions.

Besides the answers to questionnaires, the dialectal interviews also collected spontaneous speech, including the narration of traditional activities, celebrations, uses, local events, and individual experiences, which allowed to gather an important amount of ethnographic information and speech data for other linguistic purposes, such as the study of syntax.

All the interviews that have been conducted as fieldwork for these atlases were recorded on magnetic devices and later digitized for backup and archival purposes.

The Portuguese Dialects Sound Archive at CLUL consists of these digitized materials, which amount to a collection of ca. 4500 hours of recordings. These are the origins of the Dialect Sound Map, MADISON.

MADISON - A Sound Map for Portuguese Dialects is available at http://cards-fly.clul.ul.pt/teitok/madison/en/. 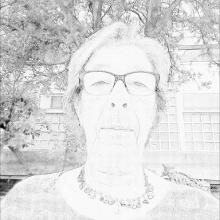