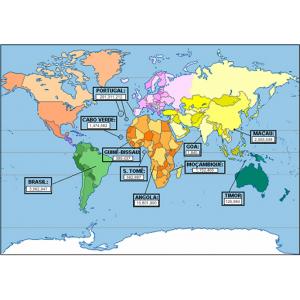 The CRPC is a large electronic corpus of European Portuguese and other varieties (Brazil, Angola, Cape Verde, Guinea-Bissau, Mozambique, S. Tome and Principe, Goa, Macao and East-Timor). It contains 311,4 million words and covers several types of written texts (literary, newspaper, technical, etc.) and spoken texts (formal and informal).
The written subpart of the CRPC (309 M) can be searched online, and subparts of the corpus are available for download or for purchase on the ELDA catalogue.

"data retrieved from the Reference Corpus of Contemporary Portuguese (CRPC) of the Centre of Linguistics of the University of Lisbon - CLUL (version 3.0 2012, using CQPWeb in the period [month/year])"

The CRPC contains 309,8M words of written texts and 1,6M words of spoken recordings and transcriptions.

It is called a ‘reference’ corpus in the sense that written texts are sampled before inclusion in the corpus.

The CRPC contains texts from the second half of the 19th century up until 2006, but most of the texts have been produced after 1970.

The texts included in the CRPC are mainly of European Portuguese, but also from other national varieties of Portuguese in the world: Brazilian, African (Angola, Cape Verde, Guinea-Bissau, Mozambique and Sao Tome and Principe) and Asiatic Portuguese (Macao, Goa and East-Timor). 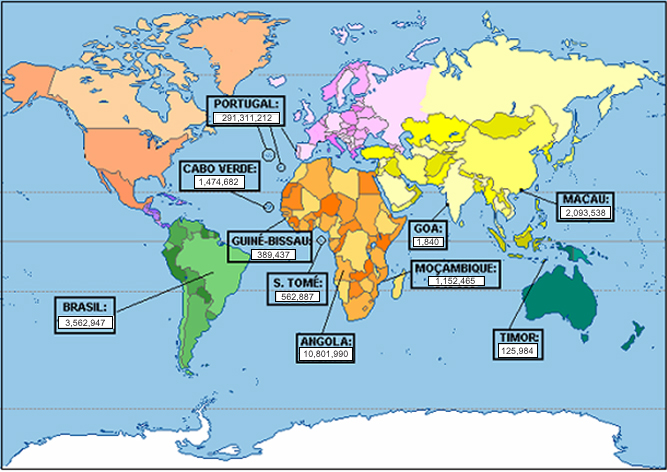 The CRPC was cleaned using Ncleaner (Evert, 2008). With this approach, the texts are first cleared of all boilerplate material using simple rules. A language model is then used to free the text from irrelevant segments (adverts, spams). Our language model was built using 200 annotated documents picked randomly from the CRPC.

The texts are automatically tokenized using the LX tokenizer (Branco and Silva, 2004) which removes punctuation marks from words and detects sentence boundaries.

For part-of-speech tagging we trained a memory-based tagger (Daelemans et al, 1996) on a slightly adapted version of the written part of the CINTIL corpus. We use a tag set of 80 different tags.

For automatic lemmatization, we created a Portuguese version of the MBLEM lemmatizer (van den Bosch and Daelemans, 1999). MBLEM combines a dictionary lookup with machine learning to assign root forms to words. As dictionary we used the lemma list produced in the project DEP - Electronic Dictionary of Portuguese, coordinated at CLUL by Maria Elisa Macedo (the computational application was developed by João Miguel Casteleiro).

The spoken subcorpus has been text-to-sound aligned with the software EXMARaLDA (Schmidt, 2004). A previous subset (project C-ORAL-ROM) used the alignment software WinPitch.

The written subpart of CRPC, composed of 309M tokens, is available to be searched online through CQPWeb.

Registering is free and requires filling in a registration form.

The spoken subpart of CRPC, text-to-sound aligned, is available to be searched online through TEITOK.

The CRPC project started in 1988, at CLUL. The team had previously been involved in the compilation of the spoken corpus Português Fundamental and the new project was a natural follow-up to cover both spoken and written texts.
The corpus was initially planned to be balanced but later evolved into a monitor corpus. A subcorpus of 11 million words was made available for the search of concordances and frequencies and has been replaced by the CQPWeb platform, which enables a large set of search options.

The CQPweb interface was designed and developed by Andrew Hardie. We would like to thank Andrew for helping us adapting the interface for Portuguese. We thank the NLX Group (Natural Language and Speech) at the Faculty of Sciences of the University of Lisbon, coordinated by António Branco, for granting us access to their LX-Tokenizer.

We would also like to thank Thomas Schmidt for adapting the EXMARaLDA software to previous formats used at CLUL.

If you have any question or suggestion concerning CRPC, please contact us at amaliamendes@letras.ulisboa.pt.

The CRPC has been used in many MA and Ph.D studies carried out in Portugal and abroad, and in research projects such as the Dicionário da Língua Portuguesa Contemporânea of the Academia das Ciências de Lisboa, which used the CRPC as a source of quotations. It was also used in the following projects at CLUL:

Schmidt, Thomas (2004) Transcribing and annotating spoken language with EXMARaLDA. In: Proceedings of the LREC-Workshop on XML based richly annotated corpora, Lisbon 2004, Paris: ELRA.